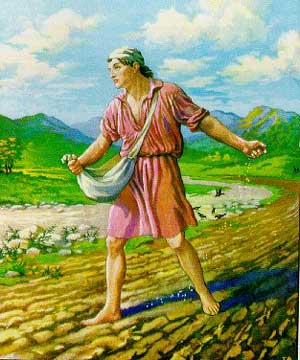 The parable of the Sower is found in the Gospels of Mark, Matthew, Luke and Thomas. I will examine the similarities and differences between the Gospels to uncover signs of editorial activity by the writers and their respective theological interests. I will also ascertain whether the allegorical interpretation is part of the original parable or added as a later tradition. Then, using a set of criteria for a genuine Jesus parable, I will reconstruct the original parable.

The parables of Jesus are a unique element of Greco-Roman literature-they are not found in earlier Roman or Jewish sources. As the Jesus tradition grew, Jesus’ parables were reinterpreted to address arising problems in the early Christian period (Funk pp.16-17). What are the marks of a genuine Jesus parable? Jesus used simple metaphors taken from nature that have a surprising twist and offer no conclusion but, instead, incite the hearer to ponder its application. Furthermore, the parables of Jesus display a distinctive plot structure, often with surprising role reversals (Funk pp. 17-18). Also, the parables of Jesus reveal features of an oral tradition-short terse sentences, minimal words and a simple plot structure comprised of pairs and sets of three. Other markers for the oral tradition include, concrete and dramatic imagery, not abstract concepts, as found in allegorical interpretation (Funk p. 17).

By comparing the Sower parable found in the Synoptics, it is apparent that Mark, Matthew and Luke all use the same literary structure, which includes an introduction, the parable and the allegorical interpretation. The Gospel of Thomas is a much shorter account of the Sower parable and lacks the allegorical interpretation. Also, the Synoptics use similar language and place the parable comparatively in same narrative order, although Luke moves his narrative on Jesus’ true relatives from before to after the Sower. (Funk p.8). Furthermore, we find agreeing similarities between Mark, Matthew, Luke and Thomas. All four Gospels maintain the simple narrative logic of planting, growing and harvesting, and use the same metaphorical structure of a sower sowing seeds along the path, among the rocks and thorns, and good soil, suggesting these elements make up the original structure of the parable (Scott p.362).

Matthew 13:18-19 and 22-23 emphasizes hearing and understanding the over-arching theme-the kingdom of God (Scott p. 348). Luke uses the parable as an illustration for hearing the gospel as highlighted in Luke 8:15 (Scott 349). Lastly, the Gospel of Thomas, as an independent source, suggests the parable probably circulated in the oral tradition without elaboration or an allegorical interpretation (Scott p. 344). Therefore, based on these arguments, I submit that the allegorical interpretation was added as a secondary layer and offered as a intrepretative conclusion to serve the particular interests of the evangelists (Funk p. 18).

The similarities between the Synoptic text and the Gospel of Thomas displays a paratactic construction and a repeating threefold structure of the main verbs. In Mark 4:4, the author uses “seed fell / birds came / ate it” and similarly, in Thomas 9, “some fell / birds came / gathered them up”. This repeating pattern of three appears throughout the different versions of parable suggesting that the idiom of this Jesus parable was comprised of short, clipped sentences organized in a threefold structure (Crossan p. 43). Furthermore, the repetitive pattern of the initial verb, “fell” is typical of the oral tradition (Scott p. 351). Examining Mark 4:3-4, Matthew 13:3-4 and Luke 8:5 we find almost word for word agreement. There are minor differences in Matthew, which uses the plural of “seeds” throughout parable, whereas, the texts of Mark and Luke cling to the singular. Also, Luke 8:5 adds the word “his” seed and expands the image of the seed falling to the path with an additional phrase, “and was trodden under foot”. Because there is no independent agreement for this variation, and noting that it breaks the triadic structure, it suggests a Lukan insertion. An analysis of the opening in Thomas 9:1 displays a stronger threefold structure, whereas the Synoptics have used a bridge, “And as he sowed,” as its third component of the triad (Scott p. 352). There appears strong agreement between Mark and Thomas, but using our criteria for a genuine Jesus parable, I hypothesize that Thomas 9:1-2 has the most signifying marks of an oral tradition-a compressed, lean, threefold structure suggesting it is the more authentic version of the parable (Funk p. 17).

In the next segment of the parable-the seed sown on rock, Mark 4:5-6 instantly stands out as being the longest section in the entire parable which repeats the metaphor of lack of ground three times. Moreover, the Markan author presents a visual discord of a seed that does not survive the sun’s scorching heat and a seed that grows for a time, but then withers (Crossan p. 40). Mark’s insertion of the sun infers difficult circumstances within the Markan community. This notion is further illuminated in Mark 4:16-17 with his allegorical interpretation that a scorching tribulation and persecution will arise (Crossan p. 42). Matthew 13:5-6 responds by simply agreeing with Mark 4:5-6. However, Luke 8:6 compresses this passage, removing the redundant lack of ground and the inclusion of the sun, returning this section of the parable to a shorter, more pre-Markan version (Crossan p.40). Luke’s use of “no moisture” suggests an obvious addition since it inserts a fourth element to the triadic structure of fell/grew/withered. Thomas 9:3 is clipped and direct and displays the least amount of editorial activity, thus suggesting it is the more original version because it preserves the terse threefold sentence structure that is indicative of the oral tradition (Scott p. 351).

In the section of the seed sown among thorns, we find minor textual differences. Matthew 13:7 agrees with Mark 4:7 who incidentally breaks the threefold pattern with the inclusion of, “and it yielded no grain.” Both Thomas and Luke maintain the triad structure. The phrase, “and worms ate them” in the Thomas version suggests an alternative performance concerning the harvest. In the Synoptics it is thorns, whereas Thomas opts for worms (Scott p. 354). I suggest that Luke 8:7 is more representative of the original parable because it deletes the phrase, “and it yielded no grain” thus, minimizing the word count and preserving the triadic structure (Scott p. 351).

The parable closes with the seed finding good soil and yielding a successful harvest. Mark 4:8 uses a double threefold structure: seeds fell/good soil/forth grain/ and yielding 30/60/100. This structure suggests not a fourfold emphasis, but a contrast of the three fields of failure versus the three successful harvests of the one good field (Crossan p.41). In our attempt to reconstruct the original parable, the words, “growing up and increasing” are redundant; this has been recognized by both Matthew and Luke by their elimination of this phrase. Furthermore, Matthew 13:8 reverses the threefold yield in descending order, whereas Luke 8:8 simply emphasizes the one hundredfold yield. Both approaches place the emphasis on the larger number. Thomas 9:5 closes with doubling the yield (60/120). Mark’s triple ending suggests the more original ending because it makes for distinctive poetry. Poetry often employs the terminal modification of a formal principle in poetic closure. Mark’s consistent use of the triadic structure is broken by his terminal ending of 100, signifying the parable’s ending (Crossan p. 43-44). This would suggest that Mark 4:8, less the “growing up and increasing” insertion, is closer in structure to the original version of the parable than Thomas’s doublet version.

Thus, based on our analysis of Mark, Matthew, Luke and Thomas, we now have a basis to assemble a proposed reconstruction of the Sower parable. It would read: Thomas 9:1Now, the sower went out, took a handful of seeds and scattered them. Thomas 9:2Some fell on the path; the birds came and devoured them.Thomas 9:3 Others fell on rock, did not take root in the soil, and did not produce. Luke 5:7And some fell among thorns; and the thorns grew with it and choked them. Mark4:8And other seeds fell into good soil and brought forth grain and yielding thirtyfold and sixtyfold and a hundredfold.

Scott, Bernard Brandon.
1989 Hear then the Parable: A commentary on the parables of Jesus. Minneapolis: Fortress Press.

The Synoptic Gospels reading of The Parable of the Sower